My friends and I finally got to the largest auto show – The 2016 Chicago Auto Show, this past week.
The picture below is a 2016 Challenger with that big old engine everyone is talking about. I wanted to check out the head room as I am six foot three inches tall. This car had a sunroof and my headroom was very close. FCA set up a small indoor track so that if you desired to stand in a very long line, you could get the feel of how the Hellcat engine roars to life in a Charger or a Challenger. It was quite impressive to those who waited for there turn.

I did sit in a 2016 Mustang with a 5.0L engine. The GT was locked and nobody could sit in one, but the ‘Stang I sat in had much more headroom than the Challenger. The interior display was very good. They even had a dyno set up for the 5.0L ‘Stang that was very impressive.

GM had Car of the year as per Motor Trend up on a turnstile display which looked fantastic. Seemed tighter in there than the Mustang but overall very impressive. Same as the Corvette. The top of the line car was locked, like the other models but we all sat in a “regular ” Corvette and found it to be very cool.

For the cream of the cake there was a section of cars that got my entire entourage stopping in there tracks. One side of the walkway was a line of of old Corvettes starting in 1954 and working up. The other side of the walkway Was Ford Mustangs starting in 1970 with the Boss model.
That area of the convention center was very crowded as the local car clubs brought out there toys for the show. It was interesting to listen to the other spectators discuss the cars we all love so much. 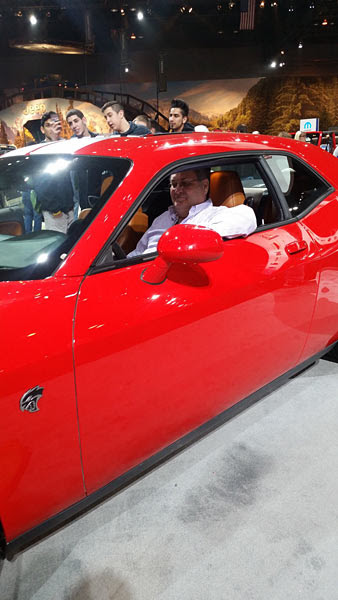 The show had a section of vendors to sell home car lifts, die cast cars, wheels and tires, burglar alarms and more. Miracle towels were all the rage as were the miracle wipe on wipe off waxes.
The show itself was very crowded all the days with the weekends of course being the busiest.
areas that gain the most were the pick up trucks. We looked hard at the Toyota models, the Fords, the Rams and the Nissan. Nissan because they have installed a 5.0 liter Cummins engine in a pick up truck. Technology was every where and the whizz bang features were in full display.
One of the key take always for me was the amount of young men there taking a big interest in the cars. The Challenger in the picture above was surrounded by many young teenage boys looking at raw power. All I can wish for is that they stay interested enough to be our future designers and builders. Most of all I hope some stay on board to be our future technicians.
We are in dire need of top quality techs. I heard many people discussing items such as who in the heck will be able to repair these cars and trucks with all these gadgets and stuff? It made me wonder, but it also made me happy that our classic cars are not stuffed to the gills with all these items. Certainly they are wonderful creature comforts but I was happy knowing I could still fix my own car if I wanted to. These 2016 and beyond vehicles are almost impossible to work on unless you have high tech equipment and a high degree of learning capability.

We really enjoyed the show even though they zinged us $15 bucks to park and any kind of food or beverage was really high priced, like all shows. The concept cars were and usually are very nice but impractical. I enjoyed looking at the last year for the Viper. It had a sign next to it that stated it was $89,000 but within three hundred feet there was a Ford special ops truck for sale for $86,000 so pick your poison I guess.

I loved looking at the big three car companies and tried very hard to imagine what will be our classics 20 plus years from now. Some of it is easy as you expect the Camaro, Corvette, Mustang GT, and Challenger to be among those. After that it gets a bit fuzzy so time will decide. So, if you can get to one of these big shows in New York, LA, Detroit or Chicago next year be prepared to get your monies worth as it is total sensory overload.

For all muscle car parts – http://fastmusclecar.com/muscle-car-parts/

February 17, 2021
As we’ve reported recently, the 2016 Mustang is now selling across the globe in right-hand drive and introducing everybody to the muscle car world. This could have been a big gamble for Ford, but it seems to have paid off as sales for the 2016 Mustang are doing better than ever. However, Dodge and Chevrolet, especially the Mustang’s main rival, the Camaro, are staying on home territory and sales don’t seem to be anywhere near as good. Sales for the Chevrolet Camaro have dropped in the US by 42.3%, shifting 4969 units, a drop of 13.5% compared to this time last year. As the world grows to a more globally integrated arena, it makes sense to start pushing muscle cars in other territories. The Mustang, although traditionally should be left hand drive, is doing very well in Europe, Australia and recently India in the RHD format. they are familiar with the Ford brand, so the Mustang brings a bit of exotic presence to the rest of the Ford lineup. Chevrolet have a presence with their other veh
Post a Comment
Read more